Create an Account - Increase your productivity, customize your experience, and engage in information you care about.

The Odessa metro area economy has now been in a state of contraction for a full year with the Odessa Economic Index registering its 12thstraight month of decline in June. The pace of that decline clearly hastened in April of this year with the onset of the economic troubles wrought by COVID-19. From June 2019 - March 2020, the index fell by 11.4 points, losing 4.1% of its value over that period of time. From March 2020 - June 2020, the OEI fell by 23.4 points, losing 9% of its value in those three months alone.

The impacts of the coronavirus on economies at all levels - local, state, national, and international - have been nothing short of devastating, and this is true in Odessa as well with the shocking declines in economic activity, utter turmoil in the industry that drives the local economy, thousands of people thrown out of work, and households and businesses upended. 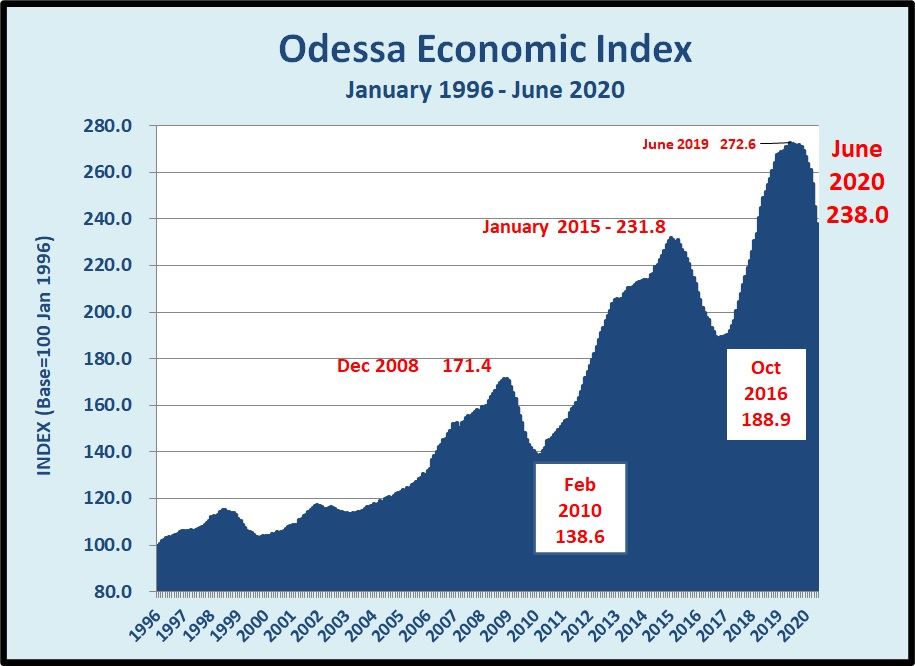 Some signs of very slight improvement began to register in May, and that continues in June. Another few jobs were added to the Odessa economy in June, and the unemployment rate appears to have peaked in May and come down a bit in June, though it remains at historically high levels. The rate of year-over-year decline narrowed in June for auto sales and existing home sales, and the number of passenger enplanements at Midland International Airport increased for the second straight month after falling to an unprecedented low level in April.

General spending numbers worsened, but that is in part because of the lag time in the data, which is to say that June sales tax numbers reflect taxable spending that occurred in April. Unlike metro areas in other parts of the state, Midland and Odessa may be slower to recover simply because in addition to the COVID lockdown, the Permian metro area economies will continue to suffer under the weight of dramatically lower aggregate oil and gas activity. No other Texas metro area, and very few nationally, are as connected to a single primary industry as are Odessa and Midland.

Crude oil prices climbed again in June, adding another nearly $10/barrel to the monthly average West Texas Intermediate posted price which improved to $34.35, up from $14.68 in April and $24.67 in May. By month's end, $40 oil had been achieved in terms of the WTI futures price and spot price at Cushing, OK.

That was not sufficient to reverse the decline in the rig count, however, which fell to a record low 82 on average for the month of June in RRC districts 7C, 8, and 8A. The weekly count dipped to 80 in the last week of the month. The Texas statewide and U.S. national rig counts also reached record lows in late May and continued to decline all through the month of June. In Texas, only 112 rigs were operating in the last week of June, and the U.S. national count was 265, again the lowest recorded totals in the 76-year history of the Baker-Hughes rig count.

The number of drilling permits issued in the region (also the total for RRC districts 7C, 8, and 8A) rebounded slightly in June compared to the very low total of 156 permits recorded in May. These represent the lowest drilling permit numbers since 1998 and early 1999.

Direct oil and gas employment in Midland-Odessa has fallen by nearly 10,000 jobs since peaking in June of last year. Of those, nearly 7,300 have been lost just since March of this year, though only about 1,550 of those were lost in Odessa.

Total employment in Odessa in June is down by some 8,500 jobs since March, reflecting the loss of over 10% of all jobs in the Odessa metro area in a three-month period of time. Again, however, the seasonally adjusted employment estimates actually increased by 800 jobs from April to May and added another 300 jobs from May to June, meaning 9,600 jobs were lost from March to April. The non-seasonally adjusted employment estimate for June is down by 11.5% compared to June of a year ago, which is some better than the 13.4% rate of year-over-year decline in April and 12% in May. 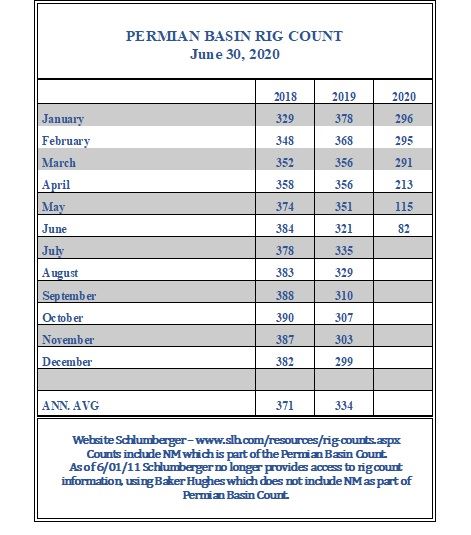 Real (inflation-adjusted) taxable spending was down by over 35% per the June sales tax numbers; however, again that total is based on spending that largely occurred in April so we would certainly expect that number to worsen compared to prior months and indeed that is the case. The July sales tax number, which is already factored into the June index calculation is down by even a larger margin compared to year-ago levels, reflecting the dual negative impacts of the COVID economic shutdown and sharply diminished oil and gas activity. General real spending per second quarter sales tax receipts is down by some 23% compared to the second quarter 2019, and the total for the year-to-date is off now by nearly 20%.

Auto spending, which is timely (June numbers actually reflect June sales activity), is recovering a bit, which is to say the margin of year-over-year decline is narrowing through June. Inflation-adjusted spending on new and used motor vehicles was down by 20.4% in June compared to June 2019, whereas April and May real auto spending posted year-over-year declines of nearly 45% and 40%, respectively. Second quarter auto sales activity was down by 35% compared to the second quarter 2019, and year-to-date auto sales are down by nearly 23% compared to the first six months of a year ago. 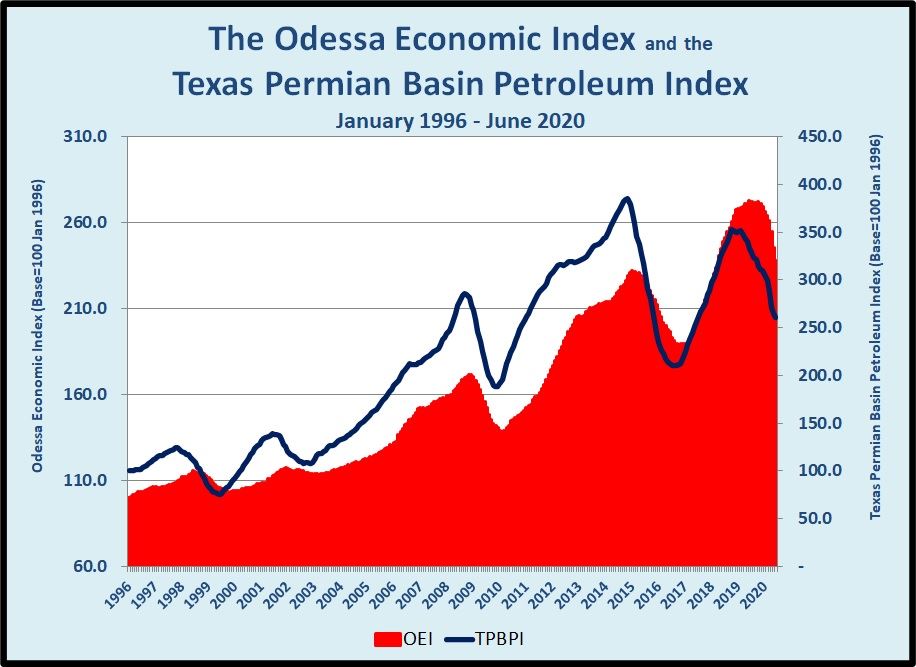 The real (inflation-adjusted) total dollar volume of housing sales is sharply lower, however, simply because of the drop in sales, posting a nearly 40% decline in the second quarter and is now down by nearly 27% through the first six months of the year.

The second quarter 2019 was an economic bloodbath in Odessa, with 8,500 jobs lost and a nearly six-fold increase in the number of unemployed residents of the Odessa metro area. Aggregate economic activity plunged, and the Odessa Economic Index reacted accordingly, logging unprecedented rates of decline in the last three months. Even at that, there were signs of an economy itching to recover, and this is true in the broader energy market as well. Optimism for steady and relatively rapid recovery has waned a bit, however, as cases started to rise again in various locales as the economy began to reopen. This presents policymakers with an obvious dilemma - reopen and risk new COVID cases, or mandate restrictions anew on economic activity and forcibly keep employment and business activity at low levels.

Economists for decades (at least a couple of centuries, actually, beginning most notably with French economist Frederic Bastiat in the 1800's) have warned about the "seen and the unseen." Policymakers generally deal in the world of the "seen" and the coronavirus appears to be no exception. What is seen is the COVID data; what is unseen are the long-term human consequences of mass layoffs and unemployment and other nasty tradeoffs that have been and continue to be made. We have now "seen" merely the first layer of the impacts of COVID and the resulting policy response, at least on the economic numbers in Odessa in just a three-month period of time with more to come.

The Odessa Economic Index has not yet reached its coronavirus low point. Even when it does and the numbers are no longer getting worse, there will still be a massive gap between that point and the pre-COVID levels of economic activity. How long will it be before that gap is completely closed, and how will this be accomplished? The answer to those questions would seem to depend entirely upon things we do not know - the nature of the spread of COVID going forward and the response of governments at all levels.